Show all categories AAV Purification Back

AAV vectors for gene therapy clearly benefit from isolation methods which are both effective and cause little or no damage to the viral particles. Density gradient centrifugation has always played an important part in the concentration and purification of virus particles.

The most prominently used gradient media, sucrose and CsCl, are highly hyperosmotic at the densities used to band viruses and generally have to be removed either by pelleting the virus or by dialysis, prior to further processing or analysis. CsCl also leads to poor recoveries and low infectivity of rAAV isolates.

Not destructive
At the densities used to purify viruses, sucrose and CsCI are highly hyperosmotic. However, OptiPrep is iso-osmotic at all densities and consequently it does not change the biological features of the purified virus.

Saves time
Unlike sucrose and CsCl, if further analysis of the purified particles is required, OptiPrep does not need to be removed by pelleting. CsCl is also known to lead to poor recovery and low infectivity of rAAV isolates. Furthermore, the low viscosity of OptiPrep allows rapid sedimentation of the AAV particles.

Higher infectivity titer
Measurements and analyses following purification, e.g. infectivity assays can be performed without the need to remove the medium e.g. by dialysis, as OptiPrep does not cause any toxic effects. Thus avoiding the risk of decreasing infectivity titers due to further propagation of the purified material.

In AAV gene therapy, OptiPrep is widely regarded as the gradient medium of choice for rAAV purification. Although originally OptiPrep was developed as an X-ray contrast medium. Its use in a medical context ensured thorough and comprehensive clinical testing.

Today, it is more and more often used as a convenient density gradient medium due to its non-ionic, non-toxic and metabolically inert features. OptiPrep allows the generation of solutions of all densities with low viscosity and osmolality. 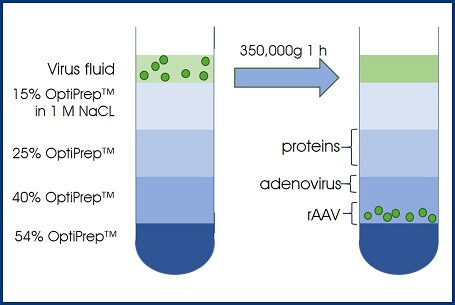 Beside its use for AAV particle purification, OptiPrep is commonly used to separate cell types from blood and other tissue e.g. monocytes, lymphocytes, spermatozoa or plant protoplasts.

Due to its chemical features and the high quality grade production it is also suitable for fractionating cell organelles, membranes and ribonucleoproteins, to separate viable from non-viable cells or to purify proteins, plasma lipoproteins, plasmid DNA.

These kind of gradients can be generated in two specific ways:

For many applications such as electrophoresis, infection of cultured cells, in vivo animal experiments, removal of the iodixanol is not a requirement. If a removal or at least reduction of the iodixanol concentration is required for any reason some form of ultrafiltration is widely regarded as the most effective method.