Show all categories Phage Display Back

A helper phage technology ("Hyperphage System") was developed by Rondot et al. (Nature Biotechnology 19:75-81, 2001). The Hyperphage System improves antibody presentation in phage display by increasing the number of antibodies displayed per phage particle (up to 5 vs. 0.01, a distinct advantage in the functional gene analysis and proteomics fields. Panning of phages can be performed with small amounts of antigen and higher efficiency. For example, the application of universal libraries for antibody isolation can be improved by employing panning of hyperphage-packed libraries on blots of protein spots after 2-dimensional gel electrophoresis.

Bacteriophages are described as viruses that infect bacteria. Further, their infection is strain specific and is limited to a narrow range of strains. The bacteriophage M13 infects E. coli strains only and is part of the group of filamentous phages that refer to the Ff-phages. Furthermore, the phage genome is comprised of single-stranded circular DNA (ssDNA) that encodes 5 coat proteins and 6 proteins that are involved in replication.
One of the coat proteins, pIII, is involved in the adsorption process during infection. Therefore, pIII plays a crucial role in phage display technology.
Advantages of the Hyperphage System

Phage display technology is associated with the genetic engineering of bacteriophages and the repetition of multiple rounds of antigen-guided selection and phage reproduction. Generally, the tool facilitates the production and the selection of monoclonal antibodies in vitro.

The process of antibody phage display starts with the preparation of an antibody-library and the ligation of antibody variable heavy (VH) and light chain (VL) PCR products into a phage display vector (phagemid). In order to express a fusion protein containing VH and VL in combination with the pIII minor capsid protein derived from the M13 bacteriophage, the phage display vector is constructed. Moreover, the vector does not contain all genes necessary to form a full bacteriophage. Therefore, a helperphage, which is also called hyperphage, is used that contains the phage genome including a pIII minor capsid deletion. Furthermore, the helperphage is cotransformed with the phage display vector library to E.coli resulting in a library of phages that carry a functional pIII on their surface but lack the pIII gene in their genome. Each phage expresses a mAb displayed on the phage surface and harbors the respective nucleotide sequence.

In order to find the phage displaying the target mAb, the phage library is screened by a process called panning. In this process, the phage library expressing different kinds of mAbs on its surface is introduced to immobilized antigens. This technique allows the selection of rare antigen-binding clones and includes of multiple rounds of phage binding to the antigen, washing steps, elution and reamplification steps via E.coli. After several rounds (most commonly 3-4 rounds for non-eukaryotic cells) of selecting specific binders and washing away of non-binders, highly specific phage clones remain.

Afterwards, testing of the phage pool is performed by phage ELISA. The identified clones of interest can easily be produced by E.coli by transforming the bacteria with the phage display vector of interest. Moreover, the monoclonal antibodies can then be purified by metal chelation and affinity purification since the phagemid encodes a protease cleavage site between pIII and the antibody fragment (scFv).

The antibody phage display technology has proven to be a robust platform to discover human antibodies and it is a powerful tool do improve the properties of antibodies. 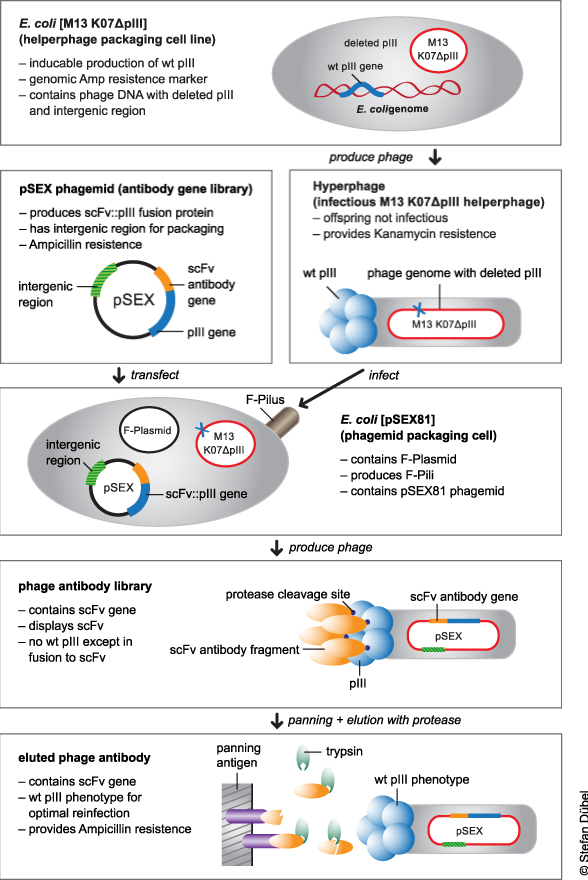 Large numbers of open reading frames (ORFs) can be analyzed by panning against synthetic membrane- bound peptide epitopes. In cancer research, the hyperphage-packed library could be a tool to discover new tumour markers by panning against cellular surfaces.

Antigen binding was enhanced by more than two orders of magnitude by using hyperphage. Further, since the antibody carrying plasmid (phagemid) encodes a protease cleavage site between pIII and scFv fragment, the hyperphage-packed library can be eluted by protease treatment, allowing to elute the highest affinity binders, plus restoring wild-type infectivity phenotype to optimize the recovery of the antibody gene of interest.

You can find protocols and original papers on the successful use of the hyperphage system here.